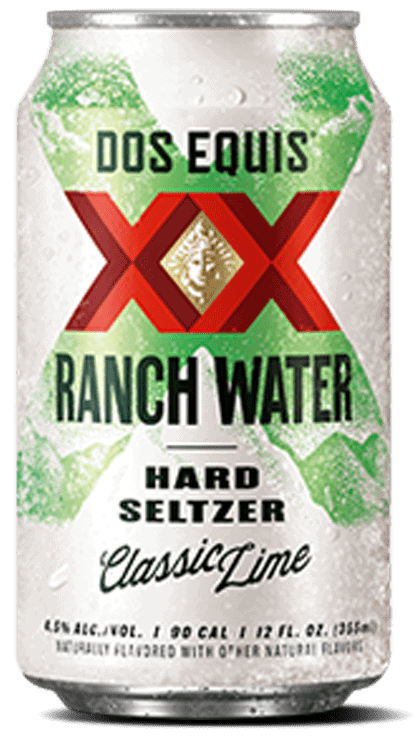 It’s no secret that the hard-seltzer boom of just a few years ago has started to fizzle. After seeing triple-digit growth in 2019 and 2020, the category increased by a much more modest 16% in 2021. A variety of factors are at work, including the obvious fact the category may have started to play itself out, especially with the influx of so many brands.

But there could be an exception to all this — a subcategory of the hard seltzer market that appears poised to take off. Namely, hard seltzer in the style of ranch water.

Ranch water is a classic Texas drink that, in its simplest form, combines tequila, lime juice and seltzer (or sparkling mineral water). So it’s basically a hard seltzer by nature. (Or a highball with tequila instead of whiskey).

In this guide, we take an in-depth look at all there is to know about ranch water. We will discuss its recent history, taste, and brewing process. We will take a particular focus upon Dos Equis who produces one of the most popular brands of ranch water. Read on to find out more.

Many companies that are offering packaged versions are finding success with ranch water. Lone River, one of the most popular brands, has seen its distribution grow from 4 to 49 states in just over one year.

Dos Equis, the Mexican beer brand owned by Heineken HEIA, +1.03%, is aiming to be a big player in this space. Last year, it launched its own ranch water in the “classic lime” flavor — what it calls “hard seltzer with country soul.” It’s part of an effort to broaden the brand’s reach beyond those who think of it just in terms of its popular lagers.

The strategy appears to be working: Dos Equis, which saw a 16.1% increase in overall U.S. brand sales last year, has already expanded its ranch water line to include a variety pack with blood orange, mango and spicy grapefruit flavors.

What we think about it

I’ve grown fairly tired of hard seltzer, a sip that seemed to be worth no more than the 15 minutes of fame it got. But I do like this Dos Equis ranch water. It’s a refresher in the most straightforward form: slightly boozy (though, technically, the alcohol in it is not tequila, but instead what Dos Equis calls a “sugar-based brew”), slightly lime-y and slightly fizzy.

In other words, just what you want to drink on a hot day. I also like the fact it’s truly a light beverage, with a mere 90 calories per can.

How to enjoy it

You can sip this one straight from the can. But the Dos Equis folks say you can take it to the next level of refreshment by pouring over ice and adding a slice of lime (or other citrus fruit) for a garnish.

Ranch Water is a tequila highball cocktail that hails from West Texas. No one knows exactly how it came to be, or even how it got the name. Some people say a Texas rancher invented it in the 1960’s. Whatever the case, Ranch Water was a word-of-mouth drink until around 2010, when bartenders in Texas started adding it to their menus. The ingredients in Ranch Water are:

Die-hards of this drink claim it’s not Ranch Water unless it’s made with Topo Chico, that Mexican mineral water brand sold in the distinctive bottles. Of course you could make it with another brand: but Topo Chico seals the deal for us.

How To Make Ranch Water

There’s really no science to Ranch Water! Because it was a word-of-mouth cocktail for so long, it’s more about vibe than anything. Really, you can use as much lime, tequila, and soda water as you’d like. Keep those bubbles on hand to refresh your drink, when you need it. Here’s the art to making Ranch Water:

What tequila to use

The better the tequila, the better the drink! Ranch Water isn’t the most sophisticated of cocktails, so we wouldn’t require pulling out the top shelf stuff. Try finding a mid-price range tequila: typically this correlates to the quality of the alcohol. You can use either tequila blanco (“new” or un-aged tequila) or tequila reposado (aged). The aged tequila has more nuance in flavor, and makes for a more interesting drink.

The rise of the simple Ranch Water represents a larger shift in American taste. For Kvetko, the drink is a gateway to understanding quality and responsibly sourced agave spirits; for Chi, it’s a way to introduce customers to serves outside of the tequila-sodas they typically call for; and for Simpson, it’s a signifier that minerality and salinity are becoming more prevalent considerations in cocktail recipe development.

But the drink is not only a bartender fixation: Ranch Water’s easy-drinking nature and easily accessible components make it a popular at-home option (or even an on-the-go move, thanks to the many ready-to-drink cans now available). The explanation for Ranch Waters’ growing fan base is as straightforward as the cocktail. Their popularity has to do with them being a simple, approachable and refreshing drink.

To put it simply, Ranch Water is the classic thirst quenching drink of West Texas ranch hands made with tequila, lime, and mineral water. While the beverage is just now taking the country by storm, its origins likely date back to the 1960s, when ranch hands concocted the refreshing beverage to mark the close of long days patrolling the fences and herding the cattle.

By the 2000’s, the simple mixture of tequila, lime, and mineral water was becoming a common, albeit still underground, beverage of choice amongst Texans in the know. By 2010, the cocktail began appearing on Texas restaurant and bar menus, which helped popularize the cocktail on a broader scale. Now, it’s a statewide badge of pride as Ranch Water becomes one of the hottest cocktails throughout the country.

As canned cocktails and seltzers grow in popularity, it’s no surprise that Ranch Water has moseyed its way into cans too.

Agave Twist Ranch Water Hard Seltzer is an Ohio version of the ultimate Texan refresher. Since Agave Twist uses a sugar wash base and does not contain any actual tequila, the company uses 100% real agave to channel the flavor of the distilled spirit.

The company skipped the artificial sweeteners and flavorings and used whole, natural fruit purée to add a juicy twist of flavor to the bubbly beverage. Using real fruit not only makes it taste like there’s fresh pineapple or blackberry in the can, it gives their seltzer a subtle hint of color too.

PrevPreviousWhat Can I Drink With Invisalign?
NextIs Heineken A Good Beer? Let’s Talk About ItNext