Jefferson’s Ocean Aged at Sea Bourbon: As Cool As It Sounds 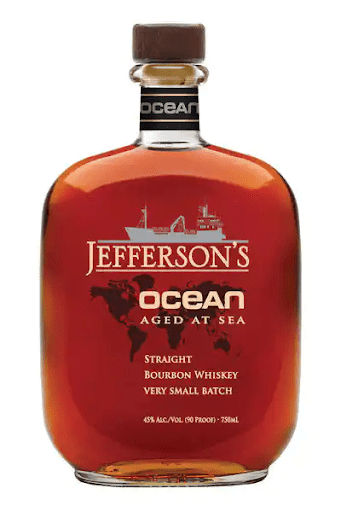 For any bourbon drinker looking for a glass of whiskey with a distinct flavor and created in a rather unusual way, Jefferson’s Ocean Aged at Sea Bourbon is the perfect product to pick up.

Unlike the typical aging process used by most distilleries, this bourbon utilizes a unique method to offer consumers a desirable taste their palate will never forget.

While many bourbon brands are on the market today, only one can honestly say its spirit was made sailing the ocean for a good cause. Here, we’ll give you our whiskey review of Jefferson’s Ocean Aged at Sea Bourbon.

Jefferson’s Ocean Aged at Sea Bourbon is a one-of-a-kind true bourbon. This unique drink got its name because of how the product was made. But before we get into too much detail regarding the bourbon itself and the interesting way it was created, let’s talk about the company behind it.

Jefferson’s Bourbon is a relatively new company in the industry and entered at a time when newcomers were not necessarily welcomed. While the Jefferson company opened its doors to the world in 1997, the family’s history and legacy in the whiskey industry started decades before.

It was way back in 1799 when the eight-generations-removed grandmother of Trey Zoeller, who would become the owner of Jefferson’s, was arrested for illegal manufacturing and distribution of spirits. This tradition passed on over the years and inspired Trey and his father, Chet, to carry on the family legacy in the same field.

While this is how the company got its foot in the door, it isn’t how the Ocean Aged at Sea collection came about.

How Is it Made?

Trey Zoeller embarked on a new adventure by trying a production technique that had never before been utilized, involving the sea itself.

While aboard the OCEARCH vessel with his friend Chris Fischer, who owns the non-profit group that studies and tracks keystone marine species, Trey came up with an out-of-the-box idea for creating a bourbon that had never been done before.

The pair placed barrels of whiskey aboard the ocean-bound ship, allowing them to age for more than three years while sailing across the Atlantic Ocean during research on OCEARCH’s mothership and at-sea laboratory.

The experiment was used to see how the whiskey tasted after traveling over waves, rocks, and salty sea air for years. It turns out it was a success.

Why Is the Bourbon Aged at Sea?

The theory behind this aging process is that the motion of the moving boat, the salty air, and the changing seasons all play a huge factor in the final product once the barrels of whiskey are tapped.

The ever-changing temperatures and the exposure to salt water air provide a thick, unique flavor profile never before seen in a spirit.

This bourbon is darker, thicker, and more savory than before, with many people comparing it to an Islay Scotch.

The Story of Jefferson’s Ocean Logo

Since the creators of this bourbon brand share the same last name, it is clear that is not where the title comes from. On the other hand, the logo on the bottle provides an easy hint as to why the company is named Jefferson’s Bourbon.

Trey Zoeller decided to use the third president of the United States and the original author of the Declaration of Independence as the logo and namesake for his company. Why you may ask?Thomas Jefferson’s “curiosity and experimental spirit” inspired the business to try innovative ways to create their product.

Because Thomas Jefferson was such a motivating force behind the company’s creativity, it only made sense to use him as their logo and business name.

However, the ocean-aged bourbon flaunts a bottle with a different logo that resembles the ship the product sails on, with an outline of the path it takes once aboard.

The bottle this ocean bourbon is placed in is a simple yet elegant glass bottle. It is thick and durable, with a shape similar to a flask. This bottle is easy to pour from and looks great sitting on top of a cabinet or tucked away in a bar.

How to Store a Bottle of Jefferson’s Ocean Bourbon

While there aren’t specific instructions for storing bourbon, keeping it out of direct sunlight and away from fluctuating temperatures is best, although this won’t necessarily make the bottle’s content go bad, it can affect the taste and flavor of the product.

How Long Does a Bottle of Jefferson’s Ocean Whiskey Last After Opening?

Even though most bourbons are safe to drink even after being opened for more than a decade, it is best to finish a bottle of Jefferson’s ocean whiskey within one to two years of breaking the seal.

After the first year or two, the flavor profile of the bourbon will begin to deteriorate, and it will not offer the same fantastic taste as it had in the beginning.

So, how does bourbon that travels the world by the salty sea taste? As you can imagine, this medium honey-brown spirit has a slight salty caramelized flavor, some savory undertones, and a peppery hue. You will also notice at first sip a solid floral and vanilla flavor.

If you ask the company, some people also state they taste cinnamon, brown sugar, and a touch of espresso.

What about the smell? Similar to the bourbon’s flavor, this aged spirit offers a salty caramel aroma, smoky scent, and soft hints of citrus.

How Much Alcohol Is in Jefferson’s Ocean Bourbon?

Jefferson’s Ocean Bourbon contains 45% alcohol and comes in at 90-proof. That is a pretty serious beverage, but it isn’t its most potent.

You can also purchase a bottle of the company’s Ocean Aged at Sea Cask Strength, which contains 59% alcohol and clocks in at a whopping 115-proof. If you like your liquor strong, this is the bottle for you.

How to Serve Jefferson’s Ocean Bourbon

You can simply enjoy this brand on the rocks if you love good bourbon. It has a unique flavor that doesn’t require mixes or other ingredients to offer a great taste.

However, if you are a fan of cocktails or need a little something to make this whiskey easier to swallow, there are many great recipes available.

Mix the ingredients above in a whiskey glass with a few ice cubes.

Most Jefferson’s Ocean Bourbon products come from the Kentucky Artisan Distillery. However, even after entering into a contract with the company, many of its bourbons still come from multiple distilleries with no mention of Kentucky origins on the label.

Where to Buy Jefferson’s Ocean Aged at Sea Bourbon

If we have piqued your interest and you would like to try some of this popular bourbon, there are many ways to get your hands on a bottle of your own.

You can find a retailer closest to you by using the “where to buy” tab on Jefferson’s website. Or, you can use the Store Locator tool at Liquor-Stores.com.

How Much Will You Pay?

The amount of money you will dole out for a bottle of Jefferson’s Ocean Aged at Sea Bourbon will vary slightly depending on where you purchase it.

Obviously, you will pay a lot more per glass if you’re ordering from a restaurant. But if you grab a bottle of this spirit from a liquor store, you should expect to spend around $80 a bottle or close to $100 if you are interested in the limited-edition cask strength.

What Others Are Saying About Jefferson’s Ocean Bourbon

The best way to know whether or not you should try a new bourbon is by looking into what other whiskey drinkers are saying.

According to many online reviews, the overall consensus is that this is an outstanding bourbon. This ocean-aged whiskey is popular among many and is a party favorite.

The price reflects the taste, with a pretty hefty tag that indicates the length of time it spends on the boat, along with the desire of many to get their hands on a bottle of this one-of-a-kind whiskey.

Most commenters note the unique caramelized salty flavors mixed with the perfect amount of oak in each bottle.

Although there were plenty of great reviews and ratings for this bottle of bourbon, it wasn’t without negative opinions. Many people mentioned that this particular batch of whiskey was a little too bitter.

No matter who you ask, the flavor is unique, and the quality is undeniable, making this an excellent bourbon for just about any occasion and worth the money you will spend to obtain it.

PrevPreviousWhite Rémy Martin: Everything You Need to Know
NextStocking Your Home Bar – The Complete Mixers ListNext