Goldslick Vodka – Is it Real? 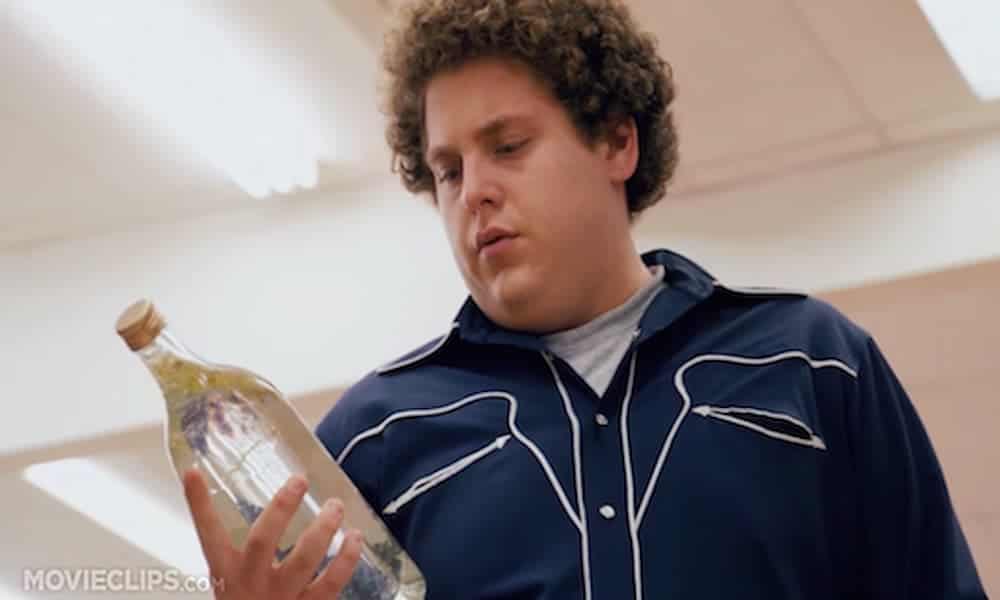 The coming-of-age comedy Superbad was a major hit where a rag-tag group of high school outsiders attempts to prove themselves to the popular kids by purchasing alcohol while underage.

While the movie is packed with hilarious and memorable lines, one of the most iconic and relatable is the list of alcohol they are asked to purchase for the big party. One girl, who happens to be one of the two main character’s love interest, requests a very specific bottle of liquor called Goldslick Vodka. Tracking down a bottle becomes a central theme of the movie’s plot.

Due to the movie’s popularity and cult status, many wonder whether or not they can purchase Goldslick Vodka. That is where we can help!

Despite its iconic status in Superbad, Goldslick Vodka is not a real type of liquor. According to a Tweet by the writer of Superbad, Seth Rogan, they wanted to use Goldschlager, but they needed more time to get clearance from the parent company.

So, since the creators of Superbad could not get legal permission to feature Goldschlager in their film, they had to get creative and create a similar but fake version of this iconic liqueur, which they named Goldslick Vodka.

This means it is a type of liqueur rather than liquor. For more information about liqueur and a detailed explanation of how it differs from liquor, consider reading our guide – Stocking Your Home Bar – The Complete Liqueurs List.

Where Does Goldschlager Come From?

Goldschlager originates from Switzerland, where it was manufactured and bottled until the 1990s. Since then, the company has been purchased by a British alcohol distributor called Global Brands Limited, which has moved production to Italy and Canada.

What Is Unique About Goldschlager?

The most noticeable thing about Goldschlager, and most likely why the creators of Superbad wanted it in their film, is that it contains visible flakes of gold. This gives Goldschlager a truly eye-catching and unique appearance, which also explains its popularity with teenagers like those featured in the film.

How Much Gold Is in Goldschlager?

The gold within a bottle of Goldschlager amounts to approximately 12mg per one-liter. While the flakes are, in fact, real gold, this small volume means it has a value of about US 75¢ per bottle.

Goldschlager comes from a German word that translates to “gold beater” in English and refers to beating gold bars into extremely thin flakes.

Given that Goldschlager is classed as a type of schnapps, it has a very sweet taste. The dominant flavor is ground cinnamon, which has a long, mouth-coating finish.

How Do You Drink Goldschlager?

While you can enjoy Goldschlager on its own, it is traditionally mixed in Switzerland with apple cider. When warmed, this makes for a sweet and delicious aperitif that is enjoyable during the colder months.

Goldschlager can also be used to make various fun and eye-catching mixed drinks. Thanks to the gold flakes within this unique liqueur, it is a fan favorite during times of celebration, such as New Year’s Eve parties. Plenty of mixers for vodka are out there and would be a hit with Goldschlager.

To learn how to make various Goldschlager cocktails and mixed drinks, visit the Official Goldschlager Website.

And if you’re looking for some good chasers for vodka, we’ve got you covered.

How Much Does Goldschlager Cost?

While you may assume that Goldschlager must be expensive if it contains real gold, it is relatively affordable. Typically, you will find a bottle for about $25; however, that price can vary depending on where you live.

You should be able to locate a 750ml bottle of Goldschlager for somewhere between $20 and $30!

Is Goldschlager the Only Type of Alcohol with Gold Flakes?

While it is obvious from the name and Seth Rogan’s admission that the Goldslick Vodka in Superbad was based on Goldschlager Liqueur, you may be surprised to learn that Goldschlager is not the only type of alcohol that contains gold flakes.

Smirnoff, one of the world’s leading vodka companies, offers a cinnamon-flavored vodka that also contains flakes of gold leaf. While Smirnoff’s Gold Collection Cinnamon Flavored Vodka might be preferable for fans of vodka, it is less common than Goldschlager.

Goldschlager is also the original, so many people prefer to display a bottle of Goldschlager on their home bar rather than Smirnoff’s copycat alternative.

Should You Purchase a Bottle of Goldschlager?

If you were curious about trying Goldslick Vodka after watching Superbad, Goldschlager is undoubtedly as close as you will get. Given that it is both affordable and widely available, there is no harm in picking up a bottle the next time you are in the mood to try something new.

As a cinnamon-flavored liqueur, you can use it the same way as any other cinnamon-flavored alcohol beverage, such as fireball or cinnamon whiskey. The gold flakes make it a great conversation starter, so it can be worth adding a bottle to your home bar or bar cart.

To find a retailer near you, use our Liquor Store Locator Tool, which will help you find liquor stores near your current location!

PrevPreviousHow Big Is a Keg of Beer?
NextWhat Is the Best Temp to Store White Wine? How To Get It RightNext