Buchanan’s 21-Year-Old Scotch: The Whisky With a Red Seal 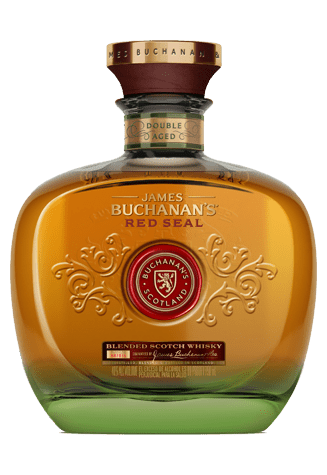 Buchanan’s 21-year-old Scotch, or the Red Seal, is a luxury whisky – one of the most popular brands. It is made from oak barrels and aged for a very long time; 21 years, in fact!

Although you might already know that this is a Scottish-inspired whisky that tastes great and comes with a pretty hefty price tag, you probably don’t know what inspired the recipe and details about the blend of Scotch whisky.

Let’s take a deep dive into this superb whisky blend and discuss in detail what this royal beverage is made of.

A Little History of Scotch

The aged Scotch whiskies that we know and love today are nothing like the Scotch whiskies that originated in Scotland way back in the late 1400s. At that time, whisky was made from malted barley, and the distillation process was less than ideal. Due to this crude process, the results were highly potent, hard to swallow, and even deadly.

It was in the 1600s that the Scottish monks upgraded the distillation processes and turned out to be masters in the niche. Scotch whisky, also known as the “water of life,” was often used for medicinal purposes, fighting off disease and illness, and would be used to warm up during the cold winters.

Over time, Scotch whisky became a way of life for many people in the country. As with everything else that was in high demand, the government decided to raise the taxes on it over and over again. This forced many distillers to take their craft “underground” for a long time.

In the 1800s, distillery licenses became available and smuggling faded. At this time, wheat and rye whisky became prevalent, and the distillery process advanced, upgrading the alcohol and providing a much more refined product.

Buchanan’s smooth Scotch was introduced to the public in 1884 by a self-made entrepreneur named James Buchanan.

James was a Canadian born to Scottish immigrants who, soon after having their son, moved the family back to the UK to the coastal Irish town of Larne. After working with his brother for over a decade in the grain business, James moved to London after taking a job at a whisky company as an agent.

This was when Buchanan realized how well a whisky business would thrive in England and decided to start producing his own Scottish blend.

In 1884 Buchanan’s product was such a success that he was given a royal warrant to produce and supply the royal house with his whisky. This drink was served to Queen Elizabeth, the Prince of Wales, and other royalty and pristine guests.

Buchanan first designed his Scotch bottles to represent water canteens shared by British soldiers while in combat. The infamous Buchanan’s red lion crest is a tribute to the founder’s roots of “Buchanan’s Scotland.”

This specific creation is 80-proof and aged at least 21 years. It is thought to be one of the company’s finest products and is believed to be a re-creation of the recipe designed by James Buchanan & Co. over 100 years ago.

Buchanan crafted this specific Scotch blend for royalty. But when the Buchanan Red Seal Scotch was launched by Diageo in the 1980s for markets in South America, it regained popularity and became a favorite amongst whisky lovers everywhere.

Buchanan’s 21-Year-Old Scotch is an old and very rare blend of Scotch whisky, which is placed in oak barrels and left to age for a minimum of 21 years. When the mix is complete, it provides a smooth and pleasing sensation and soft texture.

At first sip, you start off with a fruity, dry flavor consisting of apple and mandarin. Toward the end, you get a little smoke and spice with a hint of lemon.

When you open the bottle, your senses are overwhelmed with the whisky smell mixed with the light aroma of sweet citrus.

You will never find another Scotch whisky that tastes remotely similar to this particular mix as it is one of a kind and has been for more than a century.

How Much Alcohol Is in Buchanan’s 21?

Buchanan 21 is a 40% ABV whisky. This means that 40% of the content inside the bottle is pure alcohol. This volume of alcohol indicates the product is considered to be 80-proof. This is the legal minimum limit of alcohol and the preferred amount among most companies.

A Scotch whisky with a 40% ABV can be pretty intoxicating and should be consumed in small quantities.

Is Buchanan’s Whisky Scottish or Irish?

The origins of the Red Seal blend, created by James Buchanan, can and have thrown many people off over the years, but we can assure you, this whisky is all Scottish.

While James was born in Canada, his parents immigrated from Scotland. It wasn’t long after he was born that his family returned to the U.K., but they planted their roots in Ireland.

However, this particular brand is a Scotch whisky, and here is why:

Where Can You Buy Buchanan’s 21-Year-Old Whisky?

If you are looking to purchase a bottle of Buchanan’s Whisky, you can find them in restaurants and stores all across the world. You can also order a bottle or even an entire case online through various sites.

If you are having a hard time finding Buchanan’s 21-year-old Scotch, you can use the company’s website to locate a retailer nearest you. Click here for the Find Buchanan’s Whisky Near Me tool.

How Much Does Buchanan’s 21-Year-Old Scotch Typically Cost?

The amount of money you will pay per bottle of Buchanan’s 21-year-old Scotch whisky will vary a bit depending on where you purchase it. However, on average, you can expect to pay anywhere between $169.99 and $199.99 for a 750ml bottle.

This is the most expensive product made by the Buchanan company and shows just how fabulous the blend is. While the company only produces the finest Scotch, there are other options available for those who are looking to stick to a strict budget.

All these items are available at various restaurants and stores worldwide.

How Do You Drink Buchanan’s 21-Year-Old Scotch?

The best way to enjoy Buchanan’s Red Seal Scotch Whisky is straight from the bottle. Most people who drink this beverage prefer it neat or on ice.

However, science is a strong blend. There are other ways to drink Buchanan’s 21-year-old Scotch that can help bring down the sting of alcohol and add a little extra kick to the mix.

You can also visit the Buchanan’s Whisky website for a variety of great cocktail recipes.

PrevPreviousThe Humble Corkscrew: How to Open Wine Without a Corkscrew
NextHome Bar Essential Liquors – Must-Haves to Stock a Home BarNext